“Manners don’t cost anything” my dear departed mother used to say, all too often. But she was of course right as usual. But not having them on the road can cost you dearly, especially around one of us (or anyone using a road going camera minded to report your indiscretion!).
Why should you need manners on our roads you might ask, given the somewhat unruly, if not dam right rude demeanour of the majority of road users, after all it’s a “Dog eat dog” world out there on our road network right? Well you couldn’t be more wrong, because good manners are the by-product of a good road user. And the dog with the best manners is “Top Dog”. Those with good road manners rise above the “rabble”; their good patient nature gives their driving, riding and even walking a touch of class, and the acknowledgement of others good road manners is just the icing on the cake. But more importantly, good road manners in the long run will keep you out of trouble with ourselves, largely free of negative road experiences, and most importantly happy and stress free, on, as ACDC famously sang our “Highways to hell”. The very fact there is a “Highway to hell” and only a “Stairway to Heaven” says a lot about supply and demand when it comes to the way we live our lives, and use our roads, read on for absolution……..

Where have all the good guys(and gals) gone ?

It’s a sad reflection of modern life that upon the majority of drivers and riders getting on the road they become immune to the connection they should have to those sharing the road with them. Take that protective bubble called a motor vehicle from around them and they wouldn’t dare behave the way they do when in command of a ton plus of potentially killing metal and plastic. Like all manners, the best are learnt at home when you are young, I remember my dad saying “If someone waits for you or lets you out always say thankyou”, that thankyou being the customary raise of the hand or nod of the head if on a bike. But alas even these minor efforts are too much for the selfish and ignorant on our roads. Although a minor indiscretion like failing to thank the driver who gives way or impedes their own progress to enhance yours, isn’t something that will find you falling foul of the law, here for the uninitiated or plain ignorant is a list of breaches of road etiquette that could lead to you being prosecuted.

How to be a Knight of the Road

So here we go with a list of do’s and don’ts of road going etiquette, you will notice that most of the don’ts are actually direct contraventions of the great book that is the Road Traffic Act but alas the uneducated, unread or just plain lazy do need reminding so please share and spread the good word of the Road Traffic Act, shining a light where darkness prevails……Amen.

The rule of give way

Obstruction on your side of the road? Someone coming the other way ? Then wait ! Do not pass the obstruction, whether it be the like of a parked car or cyclist, don’t pass it until the opposite side of the carriageway is free to use. Do not hit the imaginary thin button and squeeze through, not only is it rude it is also driving without due care and attention. What if that parked car suddenly had a door opened, what if the cyclist had to avoid a pot hole? The consequences of an ill-mannered few seconds could, and all too often have, ended in a tragic collision, be patient, wait your turn, show the way to the uninitiated, you know it makes sense. 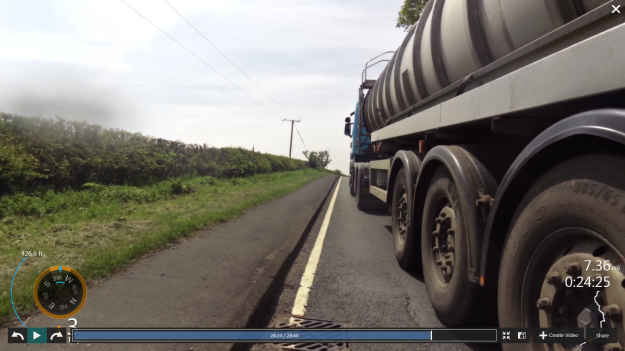 Something coming the other way whilst overtaking, best hit the “thin” button!, Classic due care offence.

And if the person coming the other way is also a “Knight or Lady of the road” and rewards your etiquette with a raise of the hand or nod of the head, well then the circle is complete and positive road going karma abounds. Perfection…….
If you don’t wait and I’m coming in the opposite direction uncommitted then have a good long hard look in your mirrors because chances are that instant karma will be turning in the road to put you on the path to educational righteousness via a report for driving without due care and attention. It happens more than you think and you’ll be amazed what we find when we inspect your vehicle, insurance and driver history. Can of worms opened……

Indicators, they don’t fit them for fun you know……

It would seem there are some drivers who have no idea what the stalk on the steering column with the directional arrows does, they probably think it’s a remote for the in car sat nav. Traffic islands see the worst of the indiscretions, no signals of intent, no breakaway/exit signal, these people obviously think that we have a telepathic link that enables us to know what their intent is. Not only is it just plain rude not to signal it is also careless and inconsiderate driving, and as with all these offences, if you have the bare faced cheek to adversely affect our progress by not signalling as the other of our Holy books, The High Way Code, instructs, expect to be stopped and again set on the road to righteousness by being reported for your inconsiderate driving and anything else we find wrong with you or your vehicle. 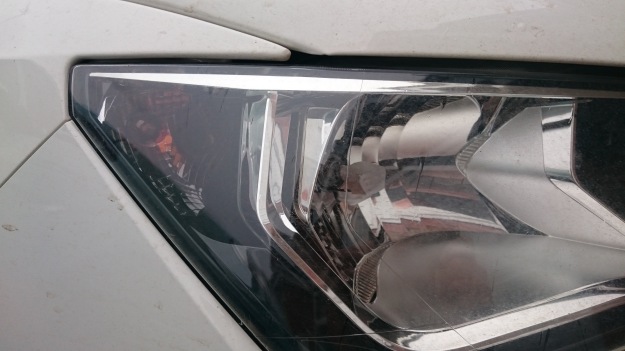 Ahh, the bulb is there, the Indicator Fairies haven’t taken it away !

Banging tune, keep it to yourself though……

So you’re sitting at the lights, minding your own business, just listening to the ambient continuous drone of the rush hour drum, and then you actually feel it before you hear it. The bass shakes your backside like the T Rex from Jurassic Park and then as you look in the mirror you see the culprit. Windows up or down, it makes no difference, the maxed out stereo booms out their favourite tune, seeking the attention they so dearly crave. Unfortunately the only attention they will get is from an emergency service vehicle as it goes over the top of them, as they have failed to hear the sirens. The least you’ll get is a fine for excessive noise, more likely reported for due care, especially if your tune leaves you unable to hear our sirens. If the volume of your radio leaves me unable to hear mine clearly, then expect an interaction with ourselves that won’t centre on how we appreciate you letting us listen to your favourite tune, no matter if we like it or not.

Not overtaking, then surely lane one is your calling….. heed it heathen!

There’s nothing more inconsiderate than occupying lane 2 or three when the nearside lanes are clear. On duel carriageways we have a little game where we guess how many miles down the road the junction on the right is that they may take. You can use lane one, that right hand turn and lane two you will access it by won’t disappear if you travel to it in lane one you know. And for those who feel more comfortable in lane two, guess what, lane one is warm and cuddly too, and just easy to drive in. Lanes two and three on motorways and duel carriageways are for overtaking only, if you’re not overtaking then move to the nearside please. Anything else is driving without due care and remember “Manners cost nothing”.

Do you really want to climb into my boot?

Tailgating isn’t just rude playground style bullying; it is one of the most dangerous things you can do in a motor vehicle. It all too often results inadvertently from our previous breach of motoring etiquette, the aversion of another road user to travelling in a clear lane one. But the age old adage of “two wrongs don’t make a right” could not be more correct. Just occasionally someone takes it upon themselves to tailgate one of our unmarked cars, flashing their headlights like an impatient bull on the charge, the resulting instant karma is one of the most satisfying things in my role, I don’t even try to hide my beaming grin of delight as yet another substandard driver comes to me rather me having to seek them out, and provides all the evidence needed for a prosecution. There is no defence for driving too close to the roaduser in-front, so don’t do it, remember your manners.
Undertaking, it’s just queue jumping in a car really isn’t it
You wouldn’t queue jump at a theme park or supermarket, so why do it on a road, surely everyone deserves the same respect, it’s just a different queue isn’t it, or does all those metal boxes change the perception and behaviour as a result ? Undertaking constitutes driving without due care and attention per say unless you are passing slow moving or stationary traffic, but where it really gets rude is when a bus lane is utilised to commit the offence. You know the scenario, its rush hour, everyone else is in lane two queued bumper to bumper as the nearside bus lane is in operation. You keep a steady watch in your nearside mirror as you know that sooner rather than later some uncouth driver will try their luck up the inside to get to the front. You can feel the “ripple” of angst rush through the waiting traffic and drivers as they accelerate past in the clear bus lane. Rest assured, cameras dominate Birmingham’s bus lanes so few get away with it in the city centre, and as for the outlying arterial routes, if we see it they will find it the most expensive saving of two minutes they have ever taken on.

Foggy is it? Only in your head in would seem………. 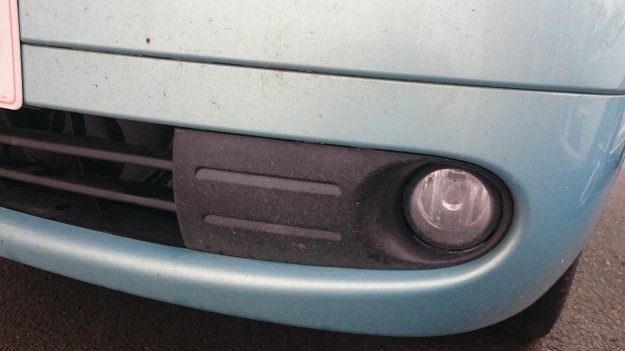 Retina Burners, to be used in visibility of 100m or less only !

There’s nothing worse than have your retina’s burnt out by someone’s fog lights, especially if they are only illuminated because the driver is under the delusion that it makes their chosen chariot look cool. This can usually be identified by the accompanying lack of dipped beam headlights; their side (or position lamps to give them their correct title) however are usually illuminated. Fog lights dazzle, they stop oncoming road users from seeing ahead and thus cause danger! If we stop you and you utter “ I wasn’t aware they were on” and there’s a clear warning light illuminated on the dash, well then that’s a clear due care and attention, not paying attention to your vehicle’s warning lights. Otherwise your lack of driving etiquette will cost you the price of a good meal with a bottle of house red. When do you use your fog lights? well the clues in the name really isn’t it…..
I’ve covered a few of the most common abhorrent road going in discrepancies but there are more we know, if there some you wish to share with us then please utilise our twitter feed to share them.
We concentrate on the fatal 4 when on patrol; this is because these offences of not wearing a seatbelt, mobile phone use, speeding and drink/drug driving are the offences that impact most significantly on our killed and seriously injured figures. But rest assured, when we come across any of the offences on patrol I have discussed today and we are uncommitted, then we will deal with them and teach the offender a lesson in road going manners.
Until next time, safe journeys all.