Oh dear, here we go again, this may ruffle a few social media feathers but those who follow us on Twitter and read our blogs in full will know that we do and say everything for the right reasons, we don’t expect everyone to agree, infact we’re happy that some don’t, just read and then constructively try to save life and limb on our roads as we do. So let’s jump right in at the deep end as usual, and tell vulnerable road users, not just cyclists, just why they leave themselves at a distinct disadvantage when it comes to being safe on the road if you wear headphones.” Victim blaming you are” I hear you say in a Yoda like fashion as all the Jedi Masters of Social Media Road Safety all utter. Well no, hopefully the wise can see past our uniform and see that from our investigative experience we are just providing advice that will prevent you becoming a casualty. Plus remember cyclist vs cyclist, and cyclist vs pedestrian collisions are an unfortunate by product of increased cycling on our roads, headphone use can be a cause of some collisions, whether that be use by a cyclist, pedestrian or motorist. And as cyclists surely we have a moral duty to set an example to motorists. So as usual, grab yourself a coffee, a piece of calorific mood enhancer (cake to the uninitiated), and read on…..

Before reading on please bear in mind the following which are the usual criticisms thrown at any advice given that suggests wearing headphones will impair your safety on the road.

“Driver’ stereo’s, don’t have a go at them do you”, Well yes we do actually. Yes drivers sometimes impair their own driving ability by having a stereo to loud or by wearing headphones themselves. If we come across a driver with music so loud or using headphones so it prevents them from hearing an emergency siren or warning horn then we will deal with them for driving without due care and attention or the offence of excessive noise.

“The hearing impaired, surely headphone use is exactly the same”. Well no, you see they counter any deficiencies they have with their hearing with enhanced use of their other senses. They are usually also very acutely aware of vibrations. Their road use as a result is usually far better than those with full hearing. Those using headphones display none of the qualities we have just mentioned that the hearing impaired have. On one of our last Safer Cycling events at the Coventry Sky Ride we had an interesting conversation with four profoundly deaf cyclists whilst they completed our questionnaires. One of the questions we ask is what do you think we could do to improve cyclist safety. They all answered “deter headphone use amongst cyclists”, they really couldn’t understand why anyone would deprive themselves of such a fundamental advantage when it comes to staying safe on our roads, and advantage they were deprived of and knew all too well the problems it can cause.

“It’s commonplace, everyone’s doing it so it can’t be that bad” All of us that cycle on CMPG Roads Policing has ridden with them on! Yes, total shocker I know but at some point all of us on the Safer Cycling Team have cycled with headphones on playing deafening music. A lot of the advice about to be given is as a result of near misses and experiences we have had whilst wearing headphones and cycling or walking as a pedestrian. 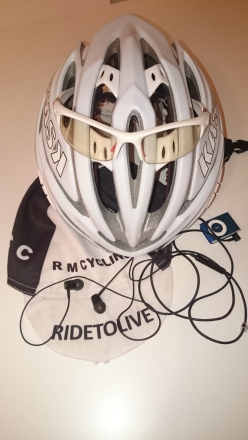 Headphones, do theyhave any place in cycling on the roads ?

No-one has eyes in the back of their head

Your ears give you a picture as to what is happening behind you. We react all the time to noises, take the ability to hear and react to noises caused by occurrences outside the periphery of your vision and you are at a distinct disadvantage.

Even those who use some sort of mirror lose out. Cycling mirrors exist, but they are only any good whilst you are looking at them. A mirror will not give you an audible warning of a hazard approaching from any direction. You see with a little experience and perception what you hear can put you at a distinct advantage when it comes to being safe on the road.

The noise of an approaching vehicle can tell you so much about the driver’s intent. Engine noise for a start, on hearing a vehicle approach from behind you will inevitably start to focus your attention on it. An increase in rev’s as the driver changes down a gear tells a lot about their intent. A change down in gear shows that the driver has seen you and the selection of a more responsive gear at higher rev’s may indicate that a purposeful planned pass will follow. Or it may indicate an intention to enter a nearby junction where a slower speed is needed. These are vital little clues as to the vehicle’s intention, from wherever it is approaching from, that you can build into your own plan.

A vehicle approaching from behind will also give away its driver’s intent by other noises. The sound of cats eyes being depressed as the vehicle behind prepares to overtake, will give a good indication of the vehicle’s intended road position during an overtake and the also the regularity of the noise will give away its speed, and together with engine noise, give an indication of acceleration or deceleration.

I once started to ride home in darkness with headphones on, in the thinking that all the things that I have just mentioned I could do without as the approaching vehicle’s lights would more than compensate as to driver intent and could be incorporated into my riding plan instead. After being passed in a matter of a few journeys by vehicles without lights on I quickly realised that my logic was misplaced and the headphones were left well and truly in the “been there done that didn’t like it pile”. Everyone else on our team has had similar experiences with headphone use, please learn from them.

Headphone use means you will miss a shouted warning, the sound of a horn, the emergency sirens, the screech of the overworked tyres belonging to the overconfident aggressive driver, the excited squeal of children playing near the road, the barking dog attached to the extending lead about to become a tripwire on the shared path you are transcending, so much will be missed that you need to recognise and incorporate into your cycling to keep you and others safe.

One last point about headphone use and this comes from my experiences of sharing the road with other cyclists and pedestrians. I don’t have a bell on any of my bikes, so when passing another cyclist or pedestrian I will shout something along the lines of “passing right” to let them know I will be passing in close proximity. You can probably guess what comes next, don’t expect shoulder checks from poor road users, and expect them to be wearing headphones and to be totally clueless as to your presence and intentions.

We’ve mentioned it a few times before, on Twitter and to those that attend our events, but for those who don’t know this is how we on CMPG Roads Policing now split our efforts when it comes to dealing with issues around cyclists and cycling.. 20% of our time is spent on educating and changing cyclist’s attitudes and behaviour. The remaining 80% we spend on driver behaviour, education and equipping those without the skills to lookout for, recognise and safely deal with the ever increasing very welcome but very vulnerable road users we find on our regions roads. We go out actively seeking to witness poor driving, hunting those compromising vulnerable road users safety and act upon it. Plain cars and officers spotting in plain clothes will be on popular commuting routes proactively seeking to deal with those endangering themselves and more importantly vulnerable road users. But there needs to be a balance, for every ying there must be a yang, for the persecuted motorist will shout from the front pages of the motoring favouring press “What about those demon cyclists, those who endanger my fragile happiness on my daily commute with their incessant law breaking, riding on the pavement, without lights or running red lights”. Well although our cyclists are not killing 80 to 90 people on our regions roads, which is what poor driver behaviour currently accounts for in the West Midlands Region, the law after all is the law and we must enforce it to cater for the needs of all those we serve. So we come to the somewhat “prickly” subject of tackling cyclists who break the law. You notice I have said “Tackling” rather than “Prosecute” because as with all our efforts at CMPG we look to educate and change road user behaviour for the better in the first instance where possible rather than prosecute. So when we find a cyclist committing an infringement which needs tackling, we will always offer an alternative to the usual fine where possible, whether that’s as simple as buying a set of lights or attending a free Bike Right course in order to avoid the inevitable fine, but I’m sure you’ll all agree, it’s better to solve a problem by creating another preacher to spread the gospel of the good road user rather than chip away at the national debt.

Cycling on the pavement, a mere nuisance or a dangerous offence that should be tackled ?

Anyway, this leads us onto what should we be dealing with cyclists for. This is where you come in, what offences do you as cyclists think fellow cyclists should be dealt with for, where should we concentrate our efforts to have the greatest impact. On the 11th November 2015 we will have an open forum on the subject at the West Midlands Cycling Forum, from which we will pick the areas on which we concentrate. Can’t make the meeting? Let us know your views via our Twitter account using the #SaferCycling tag, we value them and all will be taken into account. This is your chance to shape the future of road safety in the West Midlands, don’t miss out.

Enjoy your coffee and cake?, Good best go and burn it off, safe riding all.

Until the next time safe journeys all.